MIDDLE YEARS PROGRAMME INTERNATIONAL BACCALAUREATE
Based on a survey from the Curriculum Development Division carried out in the school in October 2012, SMK Dato’ Sheikh Ahmad is among the 10 pilot schools selected (early 2013) to implement the Middle Years Programme (MYP) International Baccalaureate in Malaysia. The project is sponsored by the Agensi Inovasi Malaysia (AIM) and the Ministry of Education (MOE).
In accordance to the Education Blueprint 2013 -2025, AIM is looking at how to infuse higher order thinking skills into the school curriculum and international practices that can be applied to prepare students for the 21st century. In this regard, the agency’s latest project in education is the introduction of the International Baccalaureate (IB) Middle Years Programme in 10 government schools across the country
The 10 schools involved in the project are SMS Tengku Muhammad Faris Petra, Kelantan, Kolej Melayu Kuala Kangsar, Perak, Kolej Tunku Kurshiah, Negeri Sembilan, SMK Sg Tapang, Sarawak, SMK Pantai, Sabah, Putrajaya Presint 9(2), Putrajaya, SMK Sultanah Bahiyah, Kedah, SMK Dato’ Sheikh Ahmad Perlis, SMK Seri Tualang, Pahang and SMKA Sheikh Abd Malek, Terengganu.
Following a memorandum of agreement signed between the IB and AIM, the project aims to prepare the selected schools to eventually achieve the IB World School status and offer the IB Middle Years Programme. The MYP is aimed at encouraging students between 11 and 16 to be creative sand critical thinkers. It offers a curriculum framework, where students are required to study at least two languages, humanities, sciences, mathematics, arts, physical education and technology. They are required to undertake an independent personal project in the final year, in order to demonstrate the development of their skills and understanding. Students will still sit for their Sijil Pelajaran Malaysia (SPM).
Malaysia is unique in carrying out the IB project as AIM had negotiated for the use of In-country consultants (ICCs). A total of four ICCs, all expatriate retired teachers from IB schools conduct face-to-face workshops in the schools to complement the online training for teachers. Both the training and online activities are conducted in English. In addition, the ICCs carry out a coaching and mentoring session for the Leadership team, school MYP Coordinator (the Senior Assistant for Administration) and assistants and teachers. The northern cluster ICCs who were responsible for five schools in North and East Malaysia were Mr. Darren Arbour and Ms. Christine Taylor. The present consultant (appointed by IB Asia Pacific) is Mr. Adrian Gan.
After each face-to-face workshop, all teachers were required to attempt three online activities to describe and reflect on strategies used in their lessons. The MYP Coordinator would brief teachers of the online task each week to facilitate teachers in giving their responses online. Teachers had problems meeting the deadlines for online activities as they were involved with meetings, co-curricular activities etc outside school. A group of teachers, called Coordinators Educator Network @ CEN were identified to help and support colleagues in the understanding and implementing of the MYP in the school.
In February 2014, the school was successful in its bid to become a candidate school offering the MYP. We are currently in the interim period (2014 -2016) to prepare the school to fully implement the MYP in accordance to IB’s standards and practices. We are thankful for the support given by the AIM, MOE and the State Education Department in overseeing the progress of the implementation of the MYP. Hopefully with this support we will be declared a member of the IB World School offering the MYP come 2016.
We are proud that SMK Dato’ Sheikh Ahmad has achieved this milestone (MYP IB candidate school) this year in its 50th celebration, considering its humble beginnings as a Malay secondary school established in 1964.
The following table shows workshop schedule conducted by the ICCs and courses conducted by the International Baccalaureate Organization for administrators and teachers from April 2013 to early 2014. 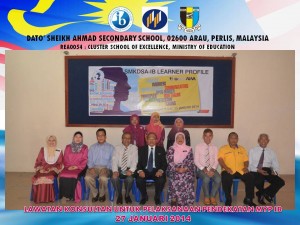 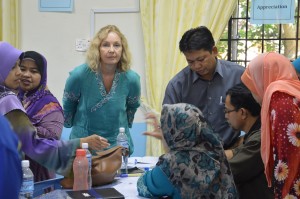 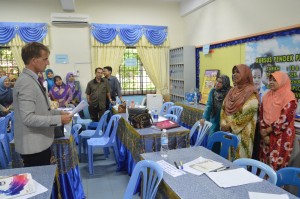